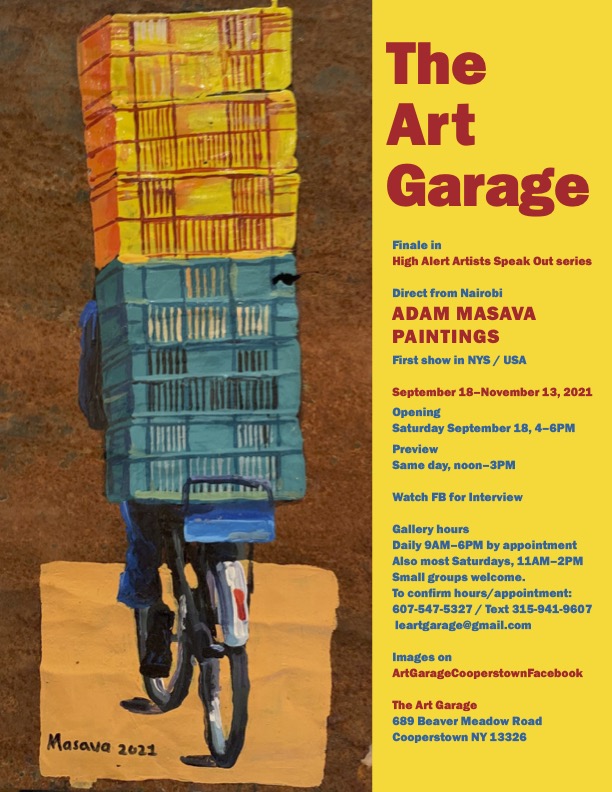 Direct from Nairobi: ADAM MASAVA, a stunning, held-over exhibition, is the finale show in High Alert Artists Speak Out series and presents the inventive up-and-coming Kenyan artist’s first NYS show. The exhibition will be on view through end of November. Hours: Saturdays 11AM-2PM, and daily with a phone call 607-547-5327 or text 315-941-9607. The show is concurrent with NEW WORKS: Ashley Norwood Cooper, Tracy Helgeson and Marcie Schwartzman in the main gallery. Adam Masava is a self-taught Kenyan artist raised in an informal settlement — the notorious Mukuru slums in Nairobi — where he draws upon positive inspiration from the people of his community whom he portrays. He started painting eight years ago and has since established a name for himself both locally and internationally. He incorporates different media in his art. The most distinctive is his use of bits of lightweight corrugated metal sheets as his canvas: this material comprises a primary building material in his community. He repurposes the metal with the end result being eloquent and elegant textured art pieces. Adam Masava is known for his figures depicted from an unusual semi- aerial perspective. This is a natural as he paints from the balcony of his studio at the Mukuru Art Collective, an informal art club he founded to provide “an alternative avenue of livelihood to the numerous unemployed and at-risk youths [in the area] as well as being a sanctuary for youths interested in art,” he noted. Through his art he is determined to show a positive side of where he grew up, for its reputation is riddled with negative biases and connotations. His figures radiate the everyday dignity of people going about their daily business—whether going to school, transporting goods on the ubiquitous and super important bicycle or teaching a child how to ride a bike. In Nairobi Mr. Masava has been awarded numerous art commission including for agencies and schools. His Kenya his work is in numerous non-profit, corporate and private collections, including the Sanergy Corporation Headquarters in Makuru. The nephew of the Art Garage founder, Sydney Waller, is a co-founder of Sanergy, which is how the Art Garage became familiar with Mr. Masva’s work. “We’re grateful to David for introducing Adam to us,” she noted, “so we can bring his remarkable work and vision to our own community.” He has exhibited locally and globally. Including in Germany (Hamburg, Essen, Mulheim), The Netherlands (The Hague) and in the United States, in Washington D.C & South Dakota. In East Africa he has shown at ISK (F.O.T.A), The Art Fair, Affordable Art Exhibition, Manjano and the Polka Dot Gallery. His most recent show, concurrent with the show at The Art Garage in Cooperstown NY that will opens September 17, is at the prestigious Circle Art Gallery, Nairobi, in a group show that features outstanding contemporary work by young African artists. For further information please see FBArtGarageCooperstown, call 607-547-5327 or text 3156-941-9607. ####