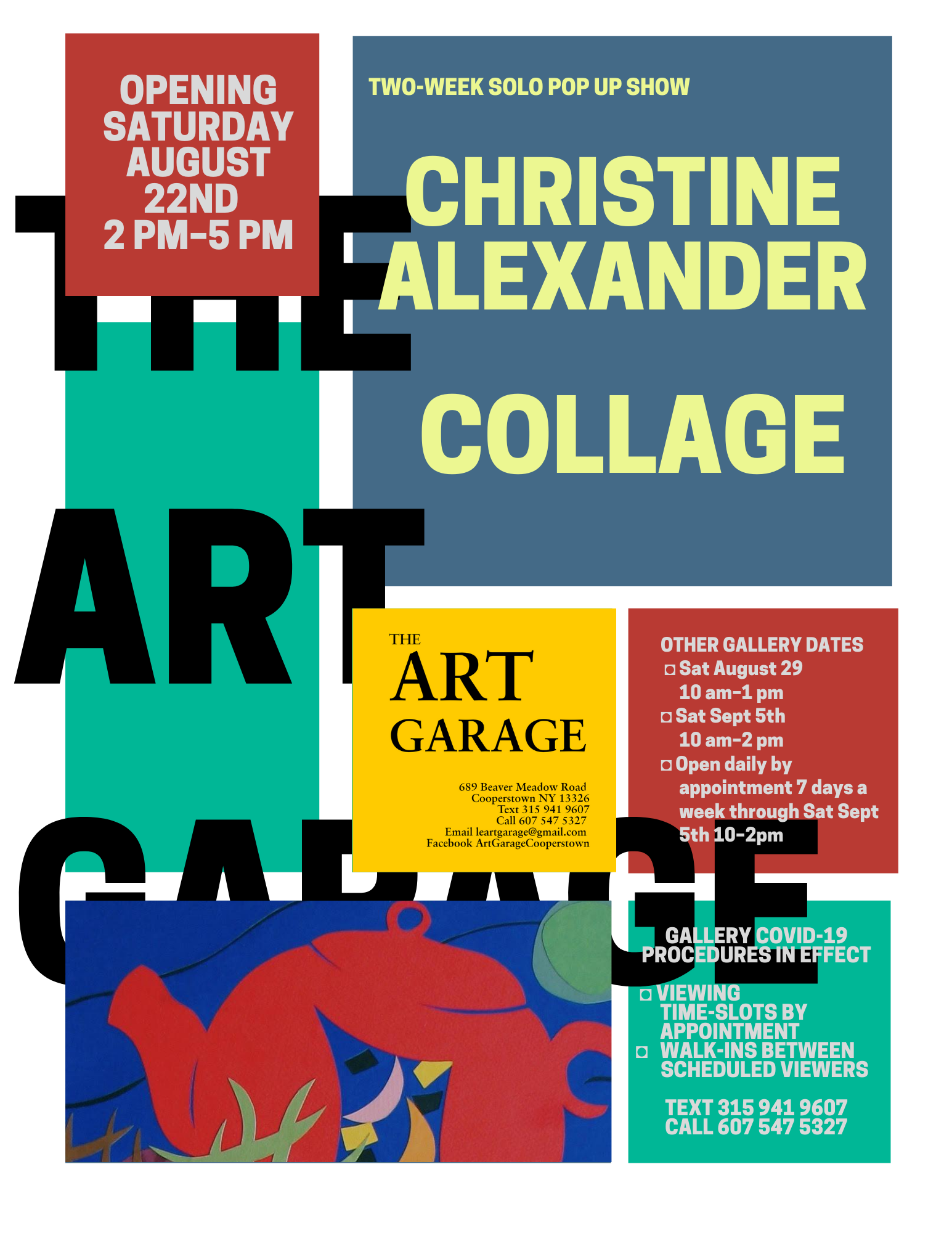 Cooperstown NY – On Saturday, August 22, the Art Garage will host an Opening Day for Christine Alexander: Collage, 2pm-5pm, at 689 Beaver Meadow Road. The two-week pop-up solo exhibition features an extraordinarily colorful body of work in the airy Middle Bay Gallery, which is fully open to the outdoors. Gallery visitors are invited to call ahead to schedule a 15-minute viewing slot. Those who do not make an appointment will be accommodated at the lulls between scheduled visits. As always visitors are requested to park and to socially distance on the gallery lawns. “Collage-making has fascinated me since high school,” Alexander noted, although only in the recent past does she consider it to be one of her principal art pursuits. “I love the arc made by a utility knife slicing paper. Cutting out shapes is fascinating. The shapes left behind are intriguing,” she explained in a statement.

Many of her collages use mainly remaindered paper from earlier works. She cuts out colorful shapes, curvilinear and straight, then moves the shapes around on a substrate, creating endless possibilities in an intuitive process.  It is almost as though she enters into a world where she communes directly with her materials in a visual dialogue. “Hours are spent experimenting in this way,” she noted, “I am never bored.” Alexander grew up on Long Island. Her parents, one from Wisconsin farm country, the other from Brooklyn, were always “making or fixing things”. Her grandmother was a seamstress and hat-maker. These family members influenced her artistic development. Earliest memories include wandering in her mother’s lush garden, picking berries and observing insects. Or convalescing under a crazy-quilt sewn from rich velvet remaindered from hat-making: “The quilt’s intense colors spoke to each other in a long intertwined conversation,” she noted.  Much of her artistic imagery derives from these early visual impressions. Attending school on Long Island, “Disparities and conflicts of religion, race, and class were apparent to me at an early age, and further influenced my life and art.”

In high school, she was drawn to the political art of Ben Shahn and others. Once she completed her studies – BA, SUNY Plattsburgh, NY; Masters in Visual Arts, North Carolina State University, NC – Alexander worked as a silversmith, photographer, writer, book designer, graphic designer and fine artist. After moving Upstate, Alexander lived in a camper in 2002 with husband, Larry Bennett, who was busy designing their dream house on a mountainside near East Meredith, in the Catskills. A year later they settled into their new abode, perched high above a hollow. Alexander has been able to devote herself almost entirely to art-making, with a studio space that can spill out into the spacious house and also connects to the outdoors.  And to her gardens, another passion she carries with her since childhood, that is also reflected in her art. Alexander’s solo follows George Hymas: Spontaneous and Deliberate, on view through 4pm on Thursday, August 20, when the gallery will open at noon.

Alexander’s show will be followed by the Labor Day Taj Garage, Sunday, Sept 6 and Monday, Sept 7, installed by Steve Clorfeine and Jenny Bates. Christine Alexander: Collage will be up through Saturday, September 5. The gallery will be open Saturday, August 29, 10am-1pm, Saturday, Sept 5, 10am-2pm, and seven days a week by appointment at other times. Just text 315-941-9607 or call 607-547-5327. Images will be available on Facebook.