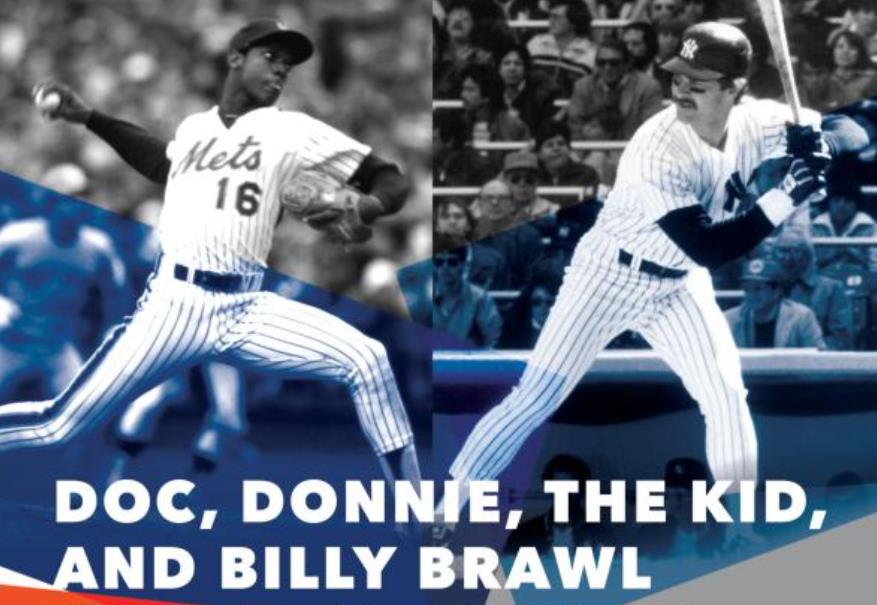 BEANIE HAZELTON – From 3pm to 5pm

CHRIS DONNELLY – From 3pm to 5pm

(See below for more information about each Author)

Jay Jaffe is a contributing baseball writer for SI.com. He is the founder of the Futility Infielder website, one of the oldest baseball blogs, and from 2005-2012 was a columnist for Baseball Prospectus and a contributor to eight BP annuals (2006-2013). In January 2004, while at Baseball Prospectus, he introduced the system that became JAWS (Jaffe WAR Score). JAWS is a tool that facilitates the comparison of Hall of Fame candidates with those already enshrined at their position, using Wins Above Replacement to capture both defensive value as well as offensive value and to account for the wide variations in scoring that have occurred throughout baseball history.

Jay is a recurring guest on MLB Network’s MLB Now and Clubhouse Confidential shows, a member of the Baseball Writers Association of America since 2011, and a former Milwaukee Brewers Sausage Race participant. He lives in Brooklyn.

THE COOPERSTOWN CASEBOOK
Who’s in the Baseball Hall of Fame, Who Should Be In, and Who Should Pack Their Plaques
By Jay Jaffe
With a Foreword by Peter Gammons
464 pages

Tucked away in a small central New York village called Cooperstown, the National Baseball Hall of Fame and Museum is far from any big league stadium, yet it’s never far from the minds of baseball players and fans. No sports hall of fame has a membership so hallowed, qualifications so debated, or a voting process so dissected.

Since its founding in 1936, the Hall’s nebulous standards for election and arcane selection processes have created confusion among voters and some glaring mistakes in who has been recognized and bypassed. Numerous “greats” have been inducted without actually being so great, while popular but controversial players such as all-time home run leader Barry Bonds and all-time hits leader Pete Rose are on the outside looking in. So are Dick Allen, Edgar Martinez and Larry Walker, three of the greatest hitters of the past half-century, the barrier-breaking Minnie Minoso, and defensive whiz Bobby Grich.

Now Sports Illustrated writer Jay Jaffe shows us how to use his revolutionary ranking system, alongside a clear-eyed look at baseball history, to ensure that the right players are recognized. The foundation of Jaffe’s approach is his JAWS system, an acronym for the Jaffe WAR Score. Through JAWS, each candidate can be objectively compared on the basis of career and peak value to the players at his position who are already in the Hall of Fame. With a passion worthy of the annual debates over candidates, Jaffe ultimately demonstrates why the Hall of Fame still matters and how it can remain relevant in the 21st century.

Dan Schlossberg is the author of 33 baseball books and thousands of articles about the game. In 2006, he co-authored autobiographies of Ron Blomberg and Milo Hamilton, wrote baseball articles for the inflight magazines of United and US Airways, and covered spring training, the All-Star Game, the winter meetings and other special events for BallTalk, a syndicated radio show for whom he is co-host and managing editor.

Dan Schlossberg is also a travel writer, Dan is president of the North American Travel Journalists Association [NATJA], travel editor of ConsumerAffairs.com, columnist for Travel World International, contributing editor for the ‘Travel With Kal’ radio show, and former president of the Working Press Association of New Jersey. His reports on travel have appeared in AAA publications and aired on XM Satellite Radio’s Lifestyles Channel 155

He will be signing 3 of his titles this weekend. The Baseball Bible, When the Braves Ruled the Diamond and Designated Hebrew: The Ron Blomberg Story.

AFTER THE MIRACLE
The Lasting Brotherhood of the ’69 Mets

“Impossible fifty years ago — and still unforgettable half a century later.”
—Bob Costas

ABOUT THE AUTHORS
Art Shamsky was a Major League baseball player for eight years, starting with the Cincinnati Reds in 1965 and then joining the New York Mets in the winter of 1967. Since his retirement from baseball, Shamsky has worked as an on-camera sports broadcaster at WNEW-TV Channel 5 in New York City and on ESPN, and as a broadcaster for the Mets, doing play-by-play and color commentary on radio and television. He is the author of The Magnificent Seasons: How the Jets, Mets, and Knicks Made Sports History and Uplifted a City and the Country.

Erik Sherman is the author of the critically acclaimed Kings of Queens: Life Beyond Baseball With The ’86 Mets, and is also the coauthor of four highly acclaimed baseball autobiographies: Out At Home (with Glenn Burke), A Pirate For Life (with Steve Blass), the New York Times bestseller Mookie: Life, Baseball, and the ’86 Mets (with Mookie Wilson); and Davey Johnson: My Wild Ride In Baseball And Beyond. Erik is an annual lecturer at the National Baseball Hall of Fame in Cooperstown, New York.

Baseball fans will want to learn and re-live the glorious 1917 Chicago White Sox team that went 100-54 and defeated the New York Giants in the World Series, four games to two. This is a team to be remembered. Did that 1917 team have the potential of becoming a baseball dynasty? To rival the New York Yankees of the 20’s and beyond?

2017 is the one hundredth anniversary of the great 1917 Chicago White Sox team! What better time to look back at ten decades of baseball on the South Side of Chicago? Baseball enthusiast and life-long Chicago White Sox fan, Mark Pienkos, has written a blend of history and personal vignettes to bring alive that 1917 White Sox team. Mark also gives his thoughts on great games and players in the one hundred years since 1917 at the crossroads of White Sox baseball located on 35th & Shields in Chicago.

A “must read” for all baseball fans, especially ChiSox loyalists!

When you’re a parent, you often hear about how fast it goes. You’re told to appreciate it and hold tight to every moment. Beanie Hazelton listened to that advice and went one step further. She collaborated with illustrator Tara J. Hannon and created a book that is truly an ode to her son and the joy she’s experienced watching him play little league baseball.

I Love to Watch You Play is a collection of beautifully illustrated memories that every parent can relate to. It details the camaraderie you build with the other parents, the pride you feel for your children’s accomplishments and the heartbreak you tend to after a tough loss.

Hazelton took her experiences, those that involved rain and the heat of the middle of summer, and created something that showcases the pride, fear, joy, and nerves every parent feels when they’re sitting on those bleachers. I Love to Watch You Play is the perfect way to show your children what this journey has meant for you.

Beanie is a devoted mother and “first fan” of two sons, who played little league baseball on fields locally and out-of-state. Over the years of sitting on the bleachers, especially during long duration games, she chronicled dozens of memorable expressions from parents, coaches, umps and players. They have been preserved on the pages of her whimsical picture book “I Love To Watch You Play.”

A part-time teacher, writer and passionate traveler, Beanie says that every time she returns from an overseas trip and catches a glimpse of a community baseball field from her airplane seat, she gets a warm feeling inside. “It’s so exquisitely American and tells me I’m home.”

“Baseball is an endeavor that makes adults out of kids and then back again,” she asserts. “And perhaps that’s the secret to lifelong happiness.”

Beanie currently lives in National Harbor, Maryland with her high school sweetheart of 42 years and approximately 60 feet 6 inches from each of her three accomplished adult children.

Doc, Donnie, the Kid, and Billy Brawl: How the 1985 Mets and Yankees Fought For New York’s Baseball Soul

Doc, Donnie, the Kid, and Billy Brawl focuses on the 1985 New York baseball season, a season like no other since the Mets came to town in 1962. Never before had both the Yankees and the Mets been in contention for the playoffs so late in the same season. For months New York fans dreamed of the first Subway Series in nearly thirty years, and the Mets and the Yankees vied for their hearts.

Despite their nearly identical records, the two teams were drastically different in performance and clubhouse atmosphere. The Mets were filled with young, homegrown talent led by outfielder Darryl Strawberry and pitcher Dwight Gooden. They were complemented by veterans including Keith Hernandez, Gary Carter, Ray Knight, and George Foster. Leading them all was Davey Johnson, a player’s manager. It was a team filled with hard‑nosed players who won over New York with their dirty uniforms, curtain calls, after-hours activities, and because, well, they weren’t the Yankees.

Meanwhile the Yankees featured some of the game’s greatest talent. Rickey Henderson, Dave Winfield, Don Mattingly, and Don Baylor led a dynamic offense, while veterans such as Ron Guidry and Phil Niekro rounded out the pitching staff. But the Yankees’ abundance of talent was easily overshadowed by their dominating owner, George Steinbrenner, whose daily intrusiveness made the 1985 Yankees appear more like a soap opera than a baseball team. There was a managerial firing before the end of April and the fourth return of Billy Martin as manager. Henderson was fined for missing two games, Lou Piniella almost resigned as coach, and Martin punctured a lung and then gave drunken managerial instructions from his hospital room. Despite all that, the Yankees almost won their division.

While the drama inside the Mets’ clubhouse only made the team more endearing to fans, the drama inside the Yankees’ clubhouse had the opposite effect. The result was the most attention-grabbing and exciting season New York would see in generations. And it was the season the Mets would win the battle for the hearts of New York baseball fans, dominating the New York landscape for nearly a decade, while the Yankees faded into one of baseball’s saddest franchises.