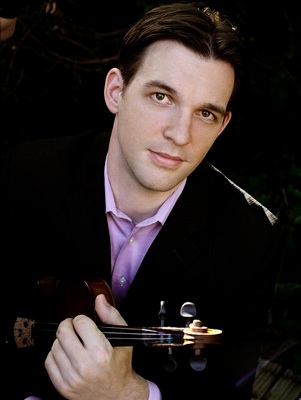 Violinist Jesse Mills will lead a chamber orchestra in a performance of Baroque works on Sunday, August 25 at 7:30pm at the Otesaga Resort Hotel ballroom in Cooperstown. The concert is the last of the Cooperstown Summer Music Festival’s mainstage August concerts.

Mills, a Juilliard-trained, two-time Grammy-nominated musician with a versatile career as both a chamber musician and composer, will lead an orchestra of some of the country’s leading musicians, including members of the New York Philharmonic, the Metropolitan Opera Orchestra, the East Coast Chamber Orchestra, and A Far Cry.

The concert will feature a selection of some of the best-loved pieces of the Baroque period, including works by Vivaldi, Corelli, Pachelbel, and Bach, as well as two pieces inspired by Baroque musical idioms: Grieg’s Holberg Suite and a modern arrangement of Geminiani’s La Follia.

Cooperstown Summer Music Festival’s founder and artistic director, flutist Linda Chesis, will be the featured soloist for a performance of Vivaldi’s delightful Goldfinch Concerto as well as Bach’s majestic Orchestral Suite No. 2.

When asked why these Baroque masterworks — written over 300 years ago — continue to captivate modern audiences, Chesis answered that the emotional content of the music is as rich as ever.

“The clarity and intensity of Baroque music speaks directly from performer to listener,” says Chesis. “Its dramatic power comes from extreme contrasts in mood and energy, like moments of breathless exuberance juxtaposed with slower passages filled with tenderness and aching beauty.

“In an increasingly fragmented world,” says Chesis, “the Baroque idea of finding order through chaos resonates with today’s audiences more than ever.”

Violinist Jesse Mills leads a chamber orchestra of some of the country’s leading musicians in a performance of Baroque and Baroque-inspired masterworks.