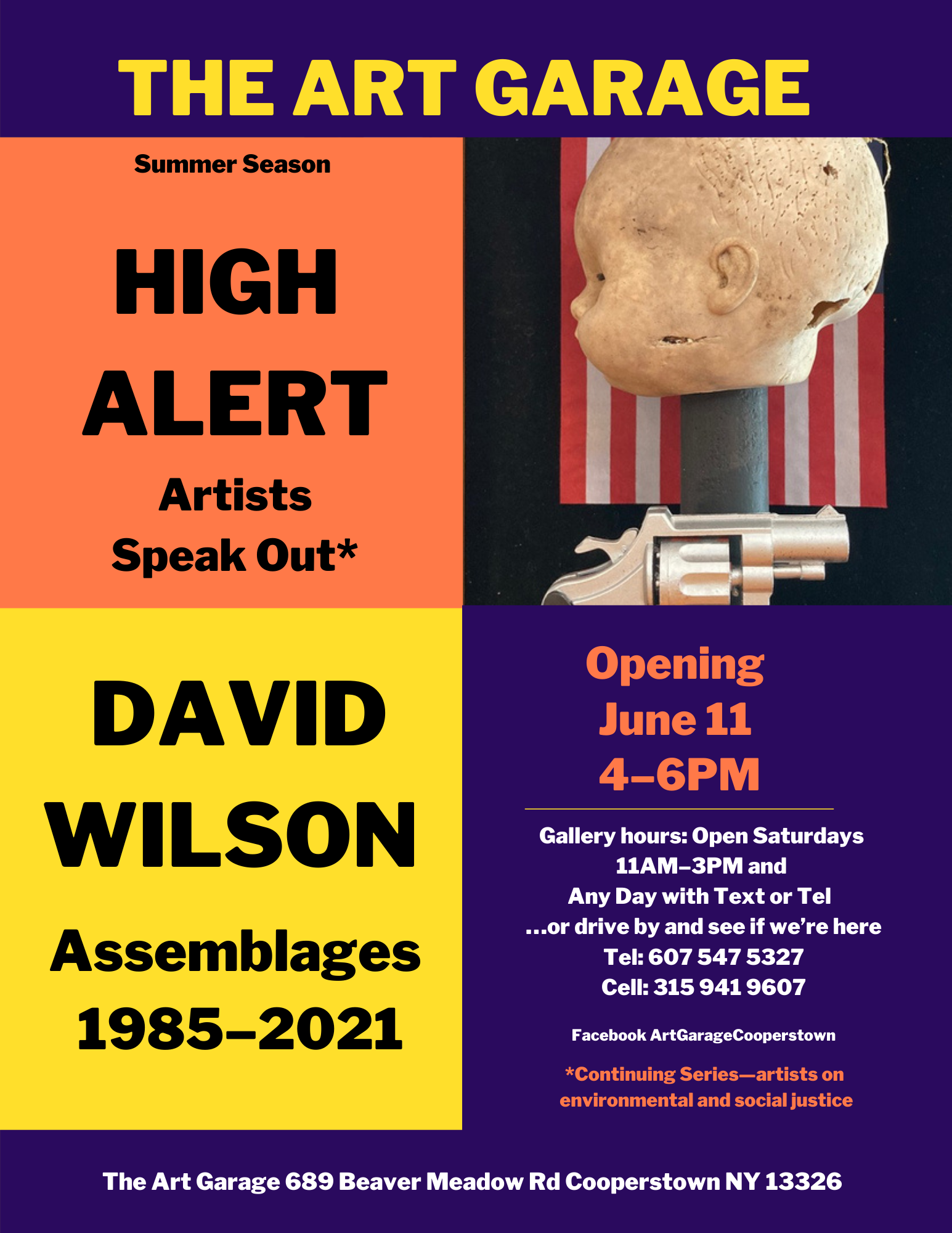 The Art Garage will launch its summer season Friday June 11 with an opening, 4PM-6PM, for two exhibitions in two of its bays The Middle Bay of the three-bay Art Garage will offer an installation of David Wilson’s freestanding and wall-mounted assemblages, 1985-2021.

Following the opening June 11, 4-6PM, the exhibition and its companion show in the Main Gallery, Lilian Voorhees: Paintings and James Herman: Projects, will be on view Saturdays starting June 12, 11am-3pm, and any other day with an appointment through July 8. Wilson’s works featured include a meditation on the (disappearing) American elm, bits and pieces of quirky objects found on his South New Berlin abandoned farm and displayed as scientific specimens in a “cabinet of curiosities,” and a towering structure on baby-carriage wheels, filled with ceramic doll head molds, bullets, a pistol and text with words like “empty heads” and “gun violence.” An environmental piece with a toggle switch offers a slowly-turning tableau and sound track. The pieces evolved as dictated by whimsy or by the materials, noted the artist, influenced by random elements including the constant barrage of disquieting news that seeps into the work. The selection of assemblages and constructions on display at the Art Garage – many elegantly engineered —speak to some of the more urgent issues the world is facing, from gun violence to environmental degradation – in a visual nonlinear manner. All are socio-political commentaries on themes of environmental or social justice. The show is Part I in a summer series called High Alert Artists Speak Out, a response to the urgent issues the world and its inhabitants face. About the artist: David Wilson, of Yorkshire, England and South New Berlin, Chenango County, is better known for his award-wining, professional design work of largescale architectural stained glass – for airports, metro stations, cathedrals and courthouses around the country.  His totally separate studio practice of constructions began playfully, akin to toymaking. Wilson has worked regularly with such leading architects as Kevin Roche and John Dinkleroo (CT) and more recently, Graham Gund (Boston.) His most recent project is at Kenyon College, Gambier, OH where he has designed as glass ceiling for the college’s new library, which was itself designed by Graham Gund. Now based in South New Berlin, Wilson studied at the Middleboro College of Art in the U.K., with post-grad studies in London at Central School for Art and Crafts. He was awarded a U.K. National Design Diploma (N.D.D.). and for many years worked in Manhattan for the Rambusch Decorating Co. before striking out on his own. Today he works with Trevor Wilson, Hobart, NY, an artist who is fabricator for his designs and is also his son. Images of much of the work can be seen at FBArtGarageCooperstown. Stay tuned for possible gallery talks in conjunction with the shows.