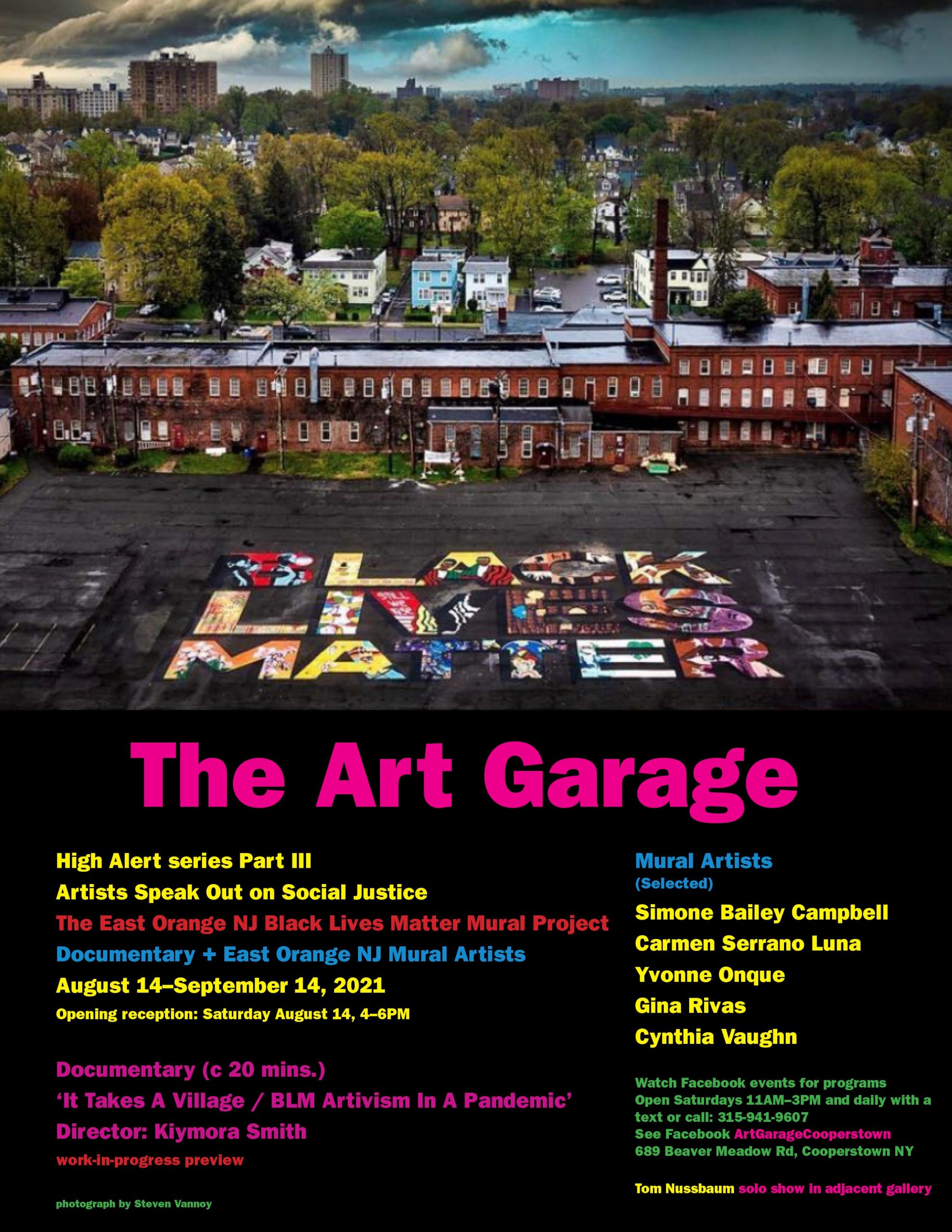 The exhibition will feature a 5-min. trailer for ‘It Takes a Village: Black Artivism,’ the first public preview of a work-in-progress documentary about the remarkable creation of a 9,000 sq ft mural in East Orange, NJ. The mural of 20’ high letters is on the parking lot of the historic 1880s Manufacturers’ Village, the original Johnson & Johnson headquarters – then known as Johnson & Seabury. The trailer will be screened continuously at the opening reception, the longer length version on following Saturdays 11AM-3PM and always daily with a phone call to set up a time for individuals or small groups through September 14, the last day of the show.

Artist Tom Nussbaum of Burlington NY and East Orange NJ was on the steering committee and the catalyst for bringing the project to Otsego County. His work will be on display in a solo retrospective in the Main Gallery that will open the same day in the Main Gallery. Regarding the mural he noted, “throughout the creation of the mural, we deliberately and methodically made sure that the creative forces controlling the images of the mural and all of the economic opportunities provided by the project went to the artists and professionals of color from greater East Orange.” He noted that the documentary by director Kiymora Smith underscores that creating public art is one way that “through artivism, access opportunity and equity can be achieved, when artists and entrepreneurs are together engaged in community development.”

Sixteen local artists with fine arts and design background worked on the mural: each worked a single 20’ high letter to memorialize the national-to-global cry, “Black Lives Matter” catalyzed by the murder of George Floyd. Project director Malcolm Rolling selected a typeface created by a Black typographer, Tres Sent, for the outline of each of the 16 letters in the phrase. Selected through a jurying process, each artist adopted and embellished a particular letter using their artistic vocabulary to express their vision for social justice. The Seabury family, direct descendants of the founders of Johnson & Johnson (originally Johnson and Seabury) are supporters of the project.

Works by five of the sixteen artists will be on display on the gallery walls. “ We are honored and humbled to showcase five remarkable women artists,” noted Sydney Waller, “and only wish we had room for all sixteen—and we are grateful to established, visionary artist Tom Nussbaum, a public art pro, for making it possible.” The works include digital media, oil and acrylic on canvas and reference the artists’ lives and or vision.

Simone Bailey Campbell, for instance, of nearby Montclair NJ, offers work from her inspiring New Day series, that signifies her hope for the future. Her art is comprised of stylized elements of native trees and plants rendered in soft pastel colors. She painted the letter “R” in the mural, in similar soft colors. Ms. Bailey Campbell holds a design degree (BFA) from Savannah College of Art and Design, GA, and like many of the artists is an entrepreneur with her own business.

Carmen Serrano Luna offers elegant subtle drawings inspired by her ancestors from Africa and the Caribbean, beautifully rendered figurative pieces that reference the spiritual iconography of Taino and African cultures. She holds a diploma in digital design from the Art Institute of Pittsburgh. PA. Ms. Serrano Luna dedicated her letter to her grandfather and “the Afro-Latino community that has faced and still faces the injustice and unfairness of being judged by the color of their skin.”

Yvonne Onque represents individual Black people whose lives have been upended or ended due to racial violence. She has created a pantheon of recently murdered Black Americans, their portraits reimagined. Sandra Bland, for example, who died in a Texas cell following a traffic stop, is rendered with the regality of an Egyptian queen. Young Tamir Rice and Breonna Taylor are represented as saints—St Tamir featured as a smiling young pharaoh, while ‘Saint Breonna’ is pensive, crowned with flowers set against a stylized halo. The mother of two professional artists – both selected to create a letter for the mural — Ms. Onque also presents the hard side of life as a Black in America: a smart young mother and child on a prison visitation – and a crowned, dignified Black man wrapped in what is perhaps a Marcus Garvey flag, that suggests wrongful incarceration. She noted that as “a mother of five children raised in an urban environment, I have learned to be particularly sensitive to the presence of hostile negative stereotypes that have haunted [our] urban youth.”

Cynthia Vaughn, a native of East Orange and Newark, studied at SUNY F.I.T. in NYC and is a member of the self-styled “Art Gang” of Manufacturers Historic Village. A storyteller, she portrays the vibrant and eclectic life in her urban Black community, such as the triad of women lost in thought listening to music on a night out in Saturday Night at the Barrel. She noted that an African-American art teacher “recognized her innate talent” as an illustrator when she was nine, and launched her artistic journey.

Gina Rivas-Velasquez earned a BFA from the Academy of Art University, San Francisco, CA, and grew up in Berkeley, CA. Of Louisiana Creole and Mexican descent, and the mother of a child with autism, she devotes her life to advocacy for inclusivity, empowerment and justice for people of color in her community. “Working on [the] mural meant a lot to me as a woman of color, to do my part to keep the subject of systemic racism as a focus.”

The work, the documentary and the stunning Tom Nussbaum retrospective show in the Main Gallery will be accessible Saturdays through September 14, 11AM-3PM and daily with a phone call or text to 315-941-9607. Groups welcome. Please see FB for rotating images.