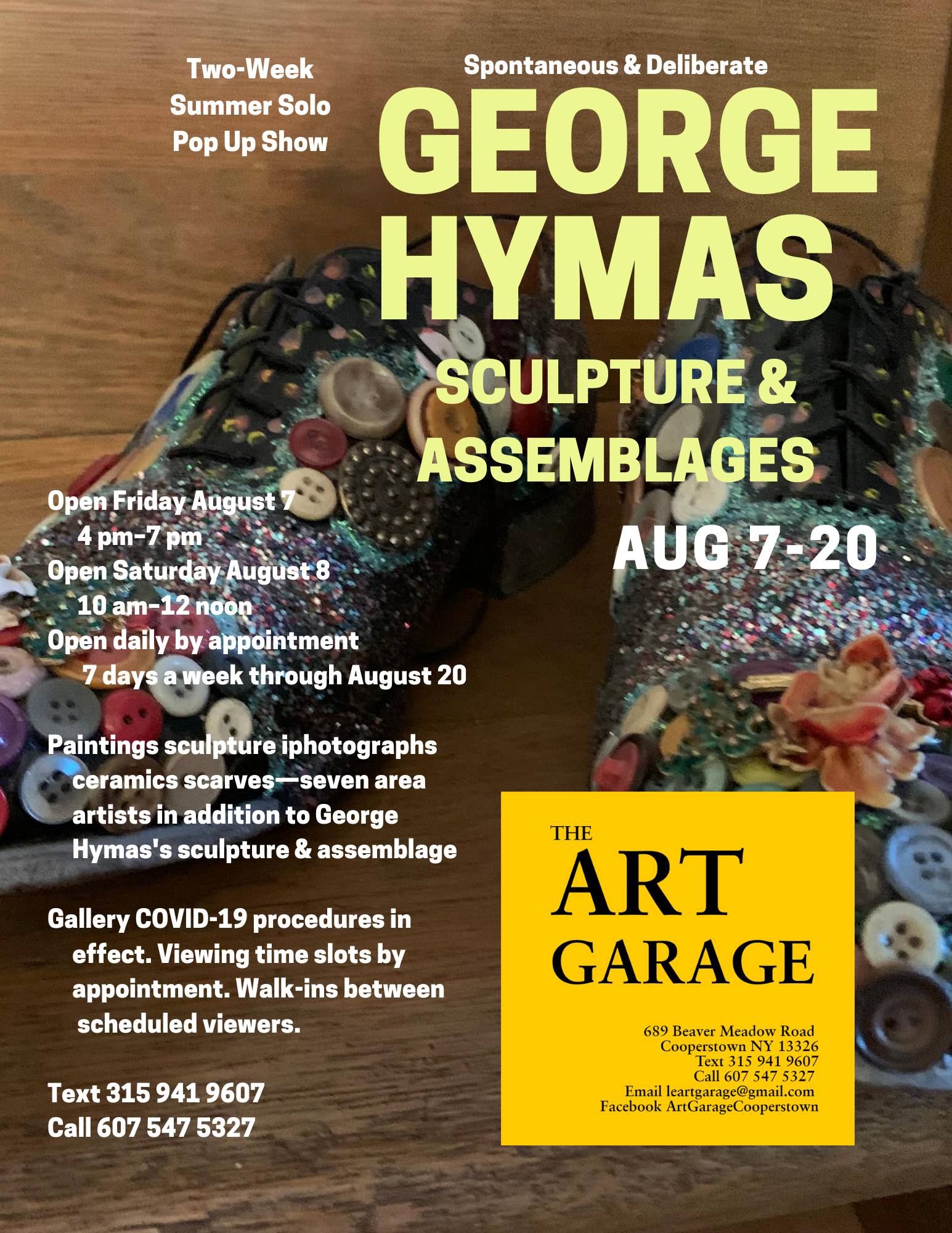 Cooperstown, NY – The Art Garage is featuring local outsider artist, George Hymas, in a two-week Solo Popup show. The gallery will be open Saturday August 15, 10am-1pm and daily by appointment through August 20. The show closes Thursday  at 4PM and on that last day will be open, noon-4pm. Installed in its airy Middle Bay gallery, 689 Beaver Meadow Road, Cooperstown, self-taught Pierstown artist, George Hymas, in George Hymas: Spontaneous & Deliberate offers visionary colorful sculpture created from castoffs. Demolition and construction-site debris, twisted trees, spent bullets and even discarded shoes are magnificently repurposed.  These found objects are embellished with patterns that often reflect his interest in early man.  His works on paper include drawings on unused coffee-filters. A creative polymath, “In a world awash with [our] castoff consumer items, I seek to re-purpose them to bring a bit of joy and laughter, especially to our presently self-distanced, quarantined Covid-19 way of life, ” he noted. He is also known for his marionettes created for Franklin Stage Theater several years ago, featured in their Midsummer Night’s Dream production.

Hymas grew up on Staten Island, influenced by family artisans and artists: boat builders, sculptors and ‘wood smiths.’ A “proud New Yorker,” early in his professional career he was a technical illustrator and architectural model builder. Then he spent twenty years as a professional firefighter for the City of South Orange, NJ, near Newark. Following retirement from firefighting, Hymas moved to Otsego County where he has restored an 1802 farmhouse in Pierstown on cleared land deep in the woods. His driveway entrance is marked by a tree encircled by a large yellow spider-like creature comprised of connected yellow dots– painted found golf balls.  In addition to making art, Hymas writes poetry and conducts research on his wide-ranging interests that include paleontology and entomology. He studied geology and early man at SUNY Oneonta. He has been known to help out with occasional carpentry work. He also enjoys baking bread.

The adjacent enclosed Main Gallery features work by seven area artists – Tracy Helgeson, Robert Seward, Vicki Whicker, Louis Sherry, Alice Hudson, Lavern Kelley and Ada Yonenaka. It can only by viewed two persons at a time.  No appointment necessary. Sanitizer is be situated near the front of the Art Garage. The second August SummerSolo PopUp show will feature collage by Christine Alexander, East Meredith, NY. Labor Day weekend offers an unexpected Return of the Taj Garage on Sunday and Monday. Later in September, the Art Garage will offer Duo Pop Up Shows. Details to follow. To schedule a visit when there are no posted gallery hours, simply text 315-941-9607 or telephone 607-547-5327. We will open for you right away if we are in.