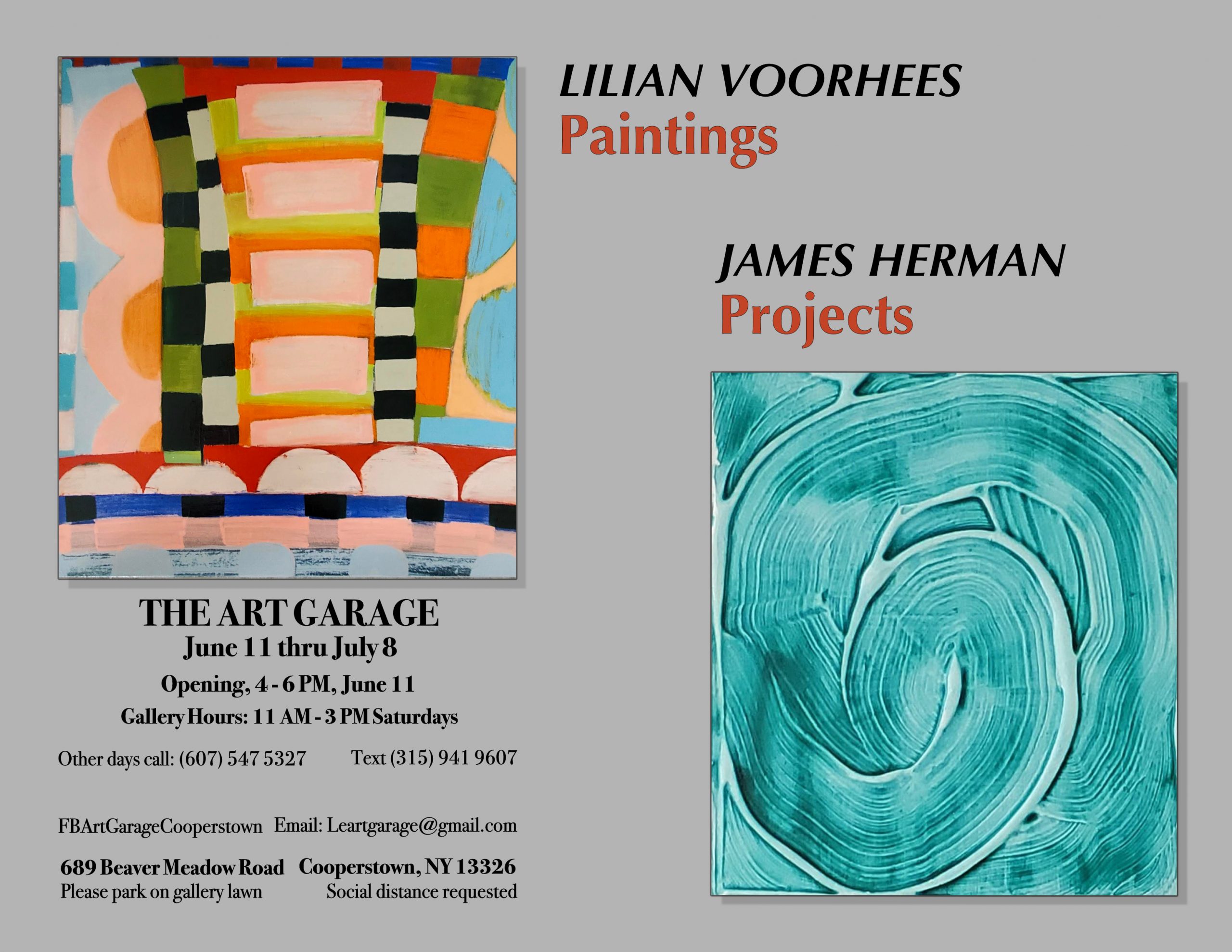 Open Saturdays 11-3, all other dates by appointment
All of the day

Open Saturdays 11-3, all other dates by appointment
All of the day

The Art Garage has launched its summer season with two striking exhibitions. The Main Gallery presents a brilliant two-person show, Lilian Voorhees: Paintings & James Herman: Projects, that feature highly anticipated new work by two established artists who will be familiar to Art Garage afficionados.  (See Middle Bay show too: David Wilson: Assemblages 1985-2021) Both shows will be on view Saturdays 11am-3pm, through July 8. (Limited hours on July 4.) We will open seven days a week with an appointment: just  text 315-941-9607 or call 607-547-5327. Images of much of the work can be seen at FBArtGarageCooperstown. “It feels great to be able to offer full-blown shows again,” noted Art Garage founder/director, Sydney Waller, who also noted that as always guests are reminded to park on gallery lawns not on the town road.

In the Main Gallery – the size of one bay in a garage– James Herman offers three distinct “projects” involving color and nature. These include a photograph of a recent “field drawing” — mowing patterns large enough to be seen from a car passing by or from the air. He continues to drill down on nature: including the bark of trees, that he has referred to as “shards.”  He offers elegant two-dimensional interpretations of bark – ethereal, strong watercolors. He also offers brilliantly colored paintings on hardwood squares, presenting a grid-like tableau with stunning variations in gesture and color. Herman, who lives in a rural landscape, continues to be very much nature-focused though never with a traditional approach. “I tend to work on projects or themes where the similarities emerge after many years,” he noted “…exploration and discovery are my main motivation.” Daily walks inform his artistic choices.  He collects his materials mostly from local sources. His sculpture was recently selected by Emma Golden, Program Director at The Sam & Adele Golden Foundation for the Arts, for inclusion in the 2020 Cooperstown Art Association’s National Juried Exhibition. The sculpture was previously shown at the Art Garage. In 2018-19 he worked with bark, hawthorn thorns and interesting bits of wood he found around his home in rural Hartwick, that was featured in the two-person Art Garage show, POST NATURE, with Hudson Valley artist Sarah Draney.

Following a move from New York City, Lilian Voorhees’ subjects and inspiration are a composite of the environment that surrounds her on the rural Hartwick farm she shares with artist/designer husband, James Herman —the variety of botanical forms, the light, the season, the hour.  She noted, “The contemplative life that I have as a result of this move has allowed the work to deepen and grow.“ Her gorgeous nuanced paintings were first presented to an Upstate public in 2015 in a stunning two-person show with Tom Nussbaum, and again in 2018, in Clay.Glass.Painting, a three-person show with Robert Seward and David Wilson, also at The Art Garage. Voorhees’ searching, ambitious and very beautiful work has continued to evolve in intriguing and exciting ways as can be seen in the new paintings. Ms Voorhees formerly divided her abstracted yet expressive oil on canvas paintings into woodlands, wetlands and gardens.  Varied brushwork and organic forms on the surfaces included an arresting use of “sgraffito.” While the natural world continues to be a source inspiration, her work has evolved dramatically – with a process akin to the ‘auto-writing’ of the Bloomsbury group, unpremeditated creative flow that is for now the primary driver in the development of her current work. Both Herman and Voorhees chose to build their studios and home in rural Hartwick NY. They left the city for good in 2010.

LILIAN VOORHEES Even as a child Voorhees observed and interacted with nature: her family lived on an atypical small farm with livestock and gardens on the Philadelphia Main Line, and the children helped with chores. And, early on, she began art-making. Voorhees attended the Moore College of Art in Philadelphia, in the late 1960s/early 1970s, a heady and formative time of art-making in the US and internationally. After art school, Ms Voorhees moved to New York, below SoHo in TriBeCa, then an industrial area where pioneer artists like Ms Voorhees could then afford to own real estate before it was “discovered.” She was represented by the Andre Zarre Galley in the Chelsea district when she lived and worked in New York City. Since moving upstate she is represented by The Art Garage, Cooperstown, NY.

JAMES GREGG HERMAN James Gregg Herman’s practice encompasses fine art and design. He has exhibited in New York City and Europe.  Most recently his work was included in  “Selfie” An Exhibition of Self-portraits, Schelfhaudt Gallery, University of Bridgeport, 2017; and locally, his split-rail bench was a hit on the grounds of Glimmerglass Festival in 2015, part of the Take a Seat series curated by Sydney Waller; in 2014, Herman was  guest artist at the Smithy – Pioneer Gallery, Cooperstown, NY. Born in St Joseph, Missouri, Herman studied at the San Francisco Art Institute and earned his MFA (painting) at the University of Oregon. After a teaching stint, Mr. Herman moved to Tribeca, NY in 1974, where he maintained his art studio until a permanent move Upstate in 2010.  Prior to the move he was commuting, and had already become involved in local Upstate issues, including fracking awareness. He helped found Sustainable Otsego. The Otsego County Conservation Association named him Conservationist of the Year, in 2010 for his work against fracking. Mr. Herman’s self-described “peripatetic art career” encompasses product development, technical lectures, a studio assistant position with Malcolm Morley, and architectural illustration work for Robert A.M. Stern. His virtuosity encompasses a broad range of art disciplines.

David Wilson, of Yorkshire, England and South New Berlin, NY will offer a collection of his assemblages in the Middle Bay of the three-bay Art Garage. Created between 1985 and the present, the constructions all reference in ways subliminal or more directly the charged political issues of the times.  this show kicks off the Art Garage summer series, High Alert Artists Speak Out.  The work on display speaks to Wilson’s studio practice, that is very much separate from his professional work: he creates largescale architectural stained glass for airports, metro stations, cathedrals and courthouses around the country. This studio work began as play, akin to toymaking and inspired in part by Joseph Cornell’s boxes. The pieces evolve as dictated by whimsy or by the materials, influenced by random elements including, as can be seen in this show, the barrage of disquieting news that seeps into his work. The selection of assemblages on display at the Art Garage – many cabinet-like in construction and elegantly engineered, some with moving parts, one on baby carriage wheels—speak to urgent issues the world is facing, from gun violence to environmental degradation to  – in a visual nonlinear manner.