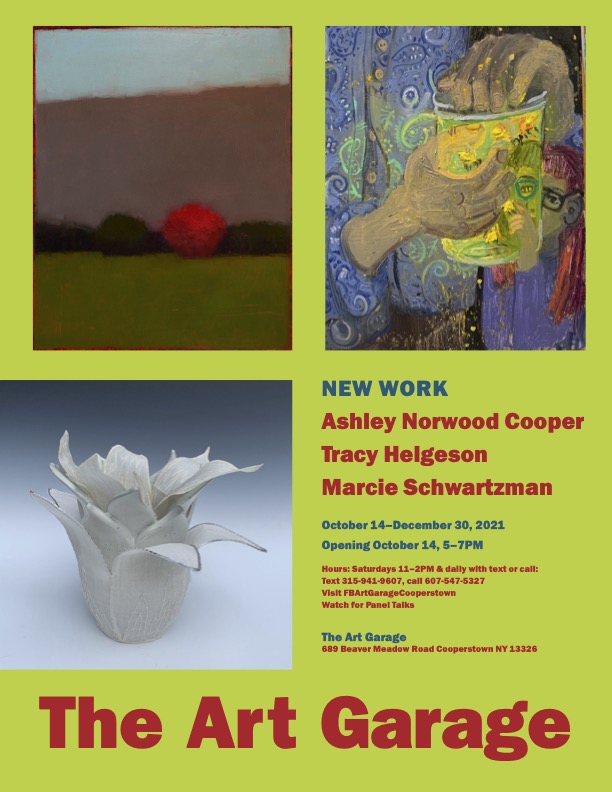 Cooperstown NY—On Friday November 19, 4:30-6:30PM, area residents and visitors are invited to attend an Open House Reception at the Art Garage complete with a portable warming pit just outside the gallery and complimentary hot beverages inside. The three extraordinary “local” artists featured in the Main Gallery will be present: Tracy Helgeson, Ashley Norwood Cooper and Marcie Schwartzman. In addition to her art featured in the New Works show, Ms. Schwartzman will offer small stoneware bowls each ringed with a band of glazed beads. Also see cameo display of ceramics by Robert Seward. The show will be on view through December 31, 2021, open Saturdays 11AM-2PM and daily 10AM-6PM with a text 315-941-9607 or call 607-547-5327, at 689 Beaver Meadow Road.

Also on view in the Middle Bay: Adam Masava: Direct from Nairobi, held over through the end of November. Mr. Masava, who lives outside Nairobi in Mukuru, an informal settlement that he calls “an infamous slum,” will be discussing his work in an international zoom interview Thursday November 18 at noon (8PM Nairobi time). Interested attendees should email leartgarage@gmail.com for more information. Accomplished established painters who exhibit regularly coast to coast, Ashley Norwood Cooper and Tracy Helgeson, will share their most recent artworks. Marcie Schwartzman, who has been developing her unique ceramic/fiber art form for two decades, will present three pieces created sequentially last summer for the Smithy’s elements’ shows, now united for the first time. Cooper creates super-charged intimate scenes that reflect the drama, the sweet and the mundane in domestic life. She now introduces insects — gorgeous fireflies and bees, as well as a new sculptural installation of oversized encaustic bees suspended from the rafters. Helgeson continues to expertly hone the landscape that surrounds her, ever further distilled to the shimmering essence of color and form. She will populate her works with an occasional barn or farm house. Much of the new work celebrates the radiance of resplendent autumn trees in smaller more intimate new works. In each of Schwartzman’s unique ceramics, a specific textile choice is finely worked to meld with the stoneware form and to collectively suggest one of the elements: air, fire, rain. An accomplished seamstress, she is combining two seemingly incongruous elements into a harmonious whole.

Kenyan artist Adam Masava’s one-man show occupies the airy open Middle Bay, Direct from Nairobi. offers accomplished paintings on corrugated metal of the industrious inhabitants of his community, painted from an on-high perspective – from the Mukuru Art Club he founded for at-risk youth. People scurry about their everyday business, industrious and with dignity, in this final show in the Art Garage’s four-part social justice series. And, in the Third Bay AKA The MG Bay, note Louis Sherry’s colorful suspended sculptures which he considers to be birdhouses and that we consider to be remarkable outsider art. See Facebook for selected images, FacebookArtGarageCooperstown

MORE ABOUT THE ARTISTS: Ashley Norwood Cooper earned her MFA in Painting from Indiana University and her undergraduate degree in Latin at the University of Georgia. Indeed, ancient myths can seep into her work: the bees reference Eurydice. She paints “because I am drawn to messiness.” She confessed “a perverse respect for the truth I see in clumsiness; I revel in inconsistencies and can’t make myself fix them or cover them up.” She observed, “New technology brings the collective id of the whole world to a tiny screen that you hold in your hands as you fall asleep each night — my family and friends are plagued with nightmares.” A self-described middleclass mom trying to raise a family in Cooperstown “in a world I cannot understand or soothe,” Cooper shared that she uses the paintbrush relentlessly “to deal with whatever vexes her.” Ms. Cooper teaches art at SUNY Oneonta. She exhibits regular in galleries in Seattle and New York, and in two years Fenimore Art Museum is offering her a solo exhibition. Her work has been reviewed in the New York Times and The Guardian, among many other publications.

Tracy Helgeson was born in Rochester, Minnesota. She attended the Minneapolis College of Art and Design, majoring in Graphic Design and then attended the Philadelphia College of Art (now the University of the Arts) where she studied illustration. Philadelphia was a great influence on Tracy and it was there that her work began to take on a unique style as she learned the under painting skills and glazing techniques that distinguish her current work. In 2003, after relocating with her family (husband and four kids!) to upstate New York and greatly inspired by the natural beauty surrounding the farmhouse that she lives and works in, Tracy began painting landscapes for the first time. She has continued to focus on landscapes as well as other farm related imagery such as barns, quiet country roads and the occasional livestock. After a recent move to a different farmhouse, with all new views, a newly empty nest and now as a mid-career artist, Tracy is still exploring color and form in the land and structures around her and keeps busy with gallery shows and a recent museum exhibit. She lives in the Cooperstown area. Marcie Schwartzman is a fiber and clay artist living and working in Cooperstown, NY. While attending Johns Hopkins University in the School of Engineering, she studied ceramics at a community center whose teachers became co-founders of the well-respected Baltimore Clayworks. A move to Richmond, VA took her to graduate study in Industrial Engineering, and clay classes at the Virginia Museum of Fine Arts. After career and child-rearing, she returned to clay in the 1990’s and in 2003 was apprenticed to Sara Baker of Bloomsburg, PA. There, she honed her skills and developed her fascination with ceramic glazes. A lifelong home sewer, she began to meld the two art forms into the work she is doing today. Her goal is to explore the qualities that fiber and clay have in common and have one enhance the other. She designs her clay forms to accommodate fiber attachments which reflect the glaze textures and she customizes her glazes in order to unify the clay and fiber elements. Schwartzman seeks to always “remain loyal to the vessel: it lends itself to metaphors about containment, interiors, dichotomies, and usefulness.”