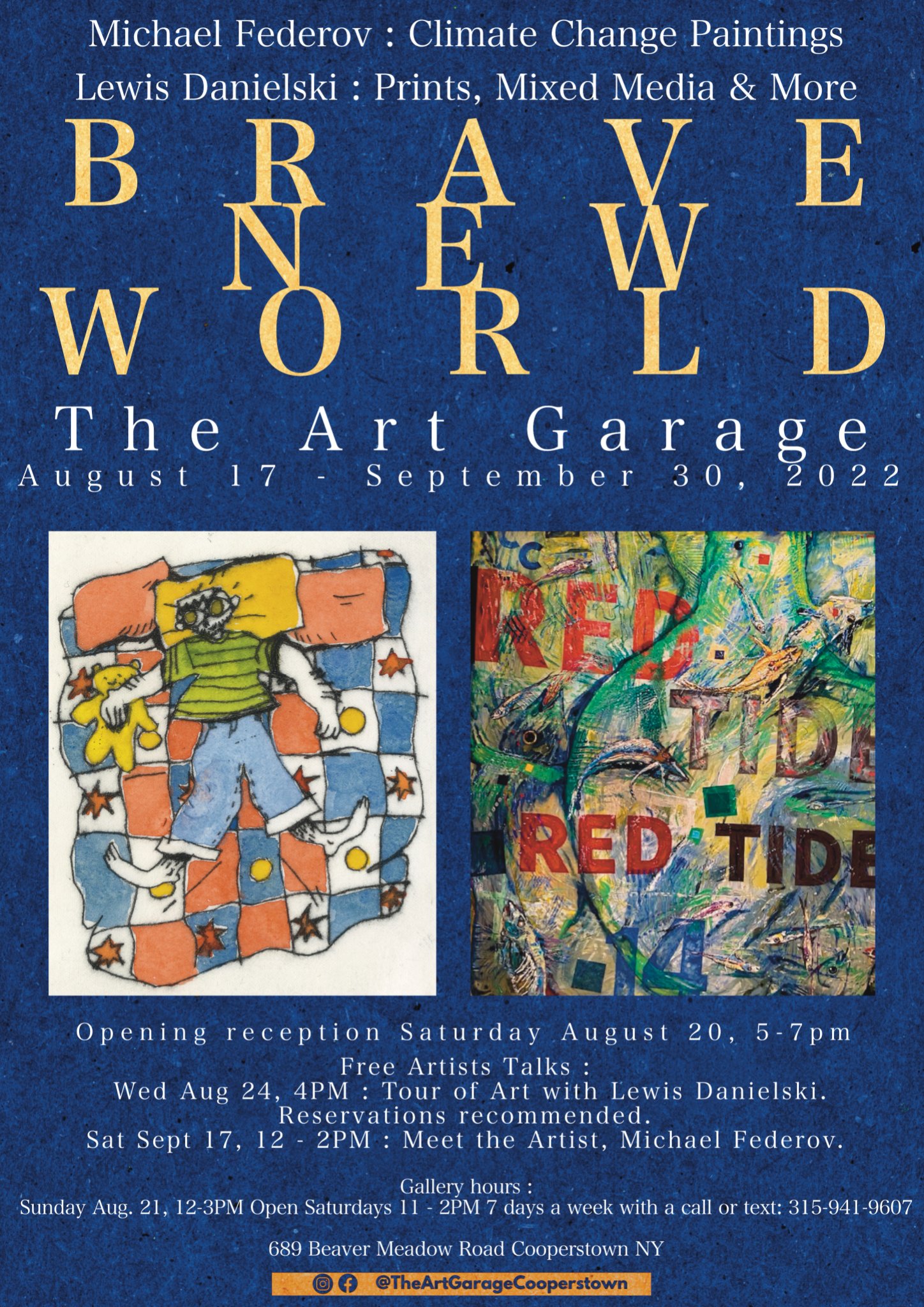 The summer season finale, Brave New World, opens Saturday August 20, 5-7 PM at the Art Garage (689 Beaver Meadow Road). The show features the work of two artists never before exhibited in the Cooperstown area. Emerging artist Lewis Danielski, whose grandparents lived in Cooperstown, grew up in Indonesia and France before completing his studies in the UK. Lifelong artist Michael Federov, who recently retired from a 30-year position at Unadilla Valley Central School (New Berlin and South New Berlin) spent his formative years in NYC and Amsterdam, NY before settling in his current home in rural Maryland, NY. Side-by-side, Danielski and Federov’s work foster an intergenerational conversation about the most urgent issues of our time—from the impending climate crisis to the fight for social justice. Join us to celebrate these poignant artistic commentaries and to face the Brave New World we find ourselves in. Light refreshments will be served.
Lewis has made art all his life and knew he wanted to be an artist from an early age. He has taken workshops periodically, including one at La Métairie Bruyère, an internationally renowned printmaking center in France. He draws inspiration and energy from the vast community of artists on social media. Danielski is a recent graduate of the University of the Creative Arts (Farnham, England) near London. His work will include a broad range of mediums—prints, collage, illustration, watercolor, assemblage and more. While particularly drawn to print-making and ceramics, he enjoys the challenge of “cross-over” art, a quality he admires in one of his favorite contemporary artists, David Hockney. Danielski explained, “Hockney doesn’t limit himself to any [one] style…—even in his old age he is trying new things – I aspire to be like this and never hole myself up in one type of work or material.”
The question of ‘home’ is one of his central themes. “[A]s someone who is very international—I don’t really have a singular home or place—I make home where I am and with the people I am with,” he said. In particular, his etching of a boy on a quilt reflects these ideas of comfort and home by reconfiguring the traditional bedcovering as a site of whimsical artistic play. His work also investigates queerness and the experience of being LGBTQ+ in public spaces. He noted, “Drawing without purpose is one of my favorite things and always helps to calm and ground me. It’s always been a way of getting hard feeling out and making something of them.”
In his climate change series, longtime artist Michael Federov presents a “…catalog of maladies and circumstances caused by, or contributing to, climate change.” Each work in the series is numbered, staging the sequence of unfolding tragedies “…as a countdown in reverse.” His work opens up a dialogue around humanity’s environmental impact in the hopes of preventing future damage and loss and inspiring renewed preservation efforts. He does not use brushes, but rather has developed a unique technique using paint scrapers and squirt bottles on Masonite and Arches paper. His delicate line work and the harsh activity of the scrape marks coalesce to remarkable effect. Using both representation and abstraction the express the many manifestations of the climate crisis, Federov paints from nature’s point of view in order to imbue emotion into the cycle of cause and effect. By creating a painterly record of each individual impact of climate change, he communicates the overwhelming stakes of the topic on an intimate scale.Federov earned his BFA at Pratt Insitute (Brooklyn) and an MA in painting from SUNY New Paltz and comes from a family of artists originating from Russia.
Federov’s family fled Russia after World War I, including to Czechoslovakia, where his mother danced at the Prague National Ballet until Hitler invaded the country. Prior to that, his grandfather, a noted set-designer, settled in Bulgaria before being exiled by Russian forces to Siberia, where he died. Humbly, Federov admits that his ancestors also include major composer Tchaikovsky as well as Eugene Zamyatin, a Russian author and contemporary of Maxim Gorky. The seed of creativity continues in Federov’s daughter, who is an accomplished artist and young art professor herself.
Federov last exhibited his art in galleries in the 1970s in New York and Washington DC, where the Washington Post made note of his work. An avid outdoorsman, his art is indelibly linked to nature and the environment. He paints full-time in his studio nestled in the Catskill foothills on the banks of a creek in rural Maryland, NY, and cherishes his time in the dreamy semi-wilderness alongside his wife and their coterie of animals.
The exhibition will be open for a preview period earlier in the week by appointment. The gallery’s will be open during its normal summer hours (Saturdays 11-3 and Sundays 12-3) until August 21st. Reduced autumn hours will begin the following weekend, with the gallery opening Saturdays from 11-2PM through September 30th. As always, the gallery is open every day with a text, call, or email at 315-941-9607 or leartgarage@gmail.com. Images and more can be seen on FB and Instagram at TheArtGarageCooperstown.