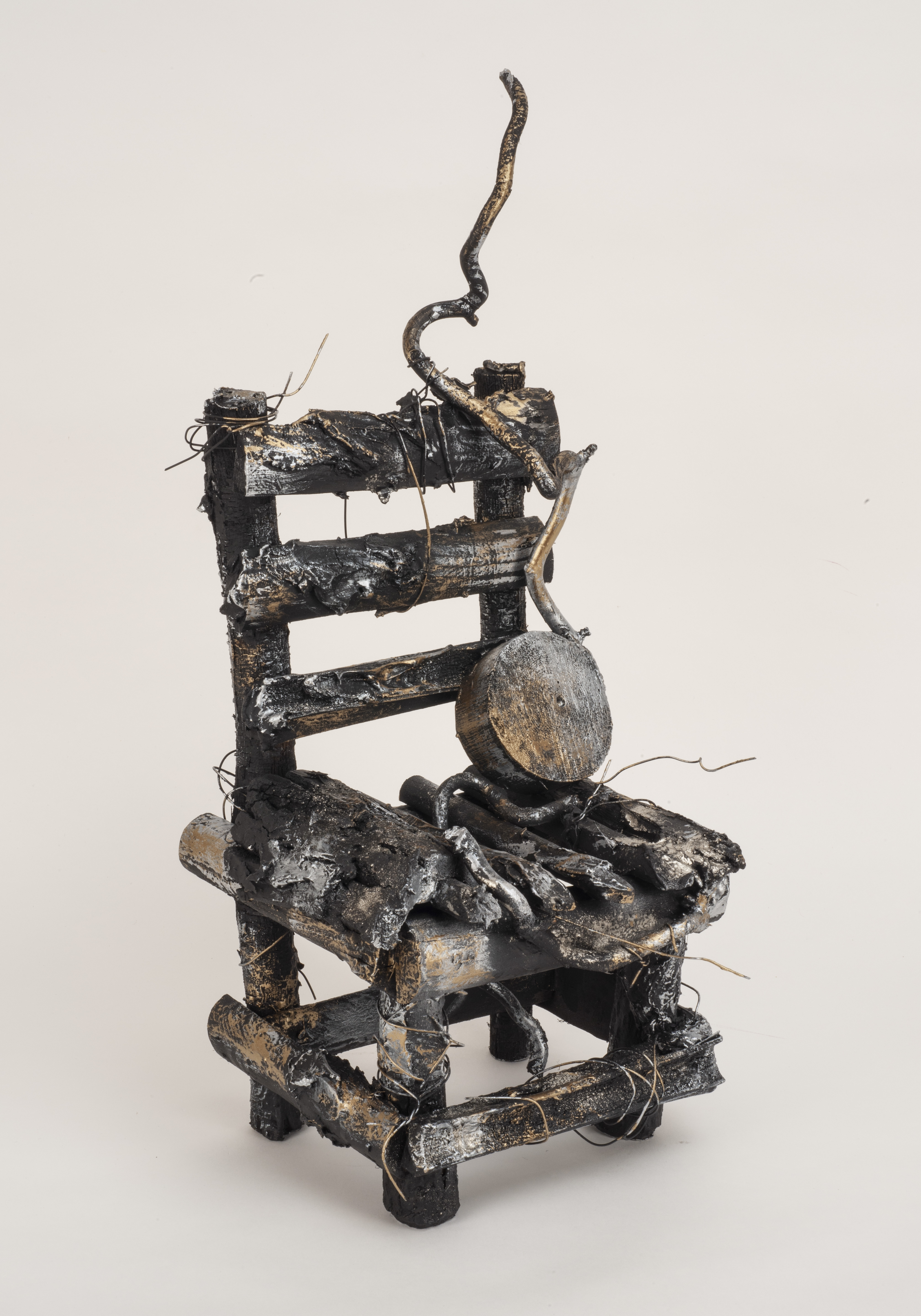 The Art Garage launches its summer season Friday May 31 with an opening reception 5-7PM for Post Nature: our natural world at risk, a two-person show at 689 Beaver Meadow Road.

Both featured artists, Sarah Draney (Hudson Valley) and James Gregg Herman (Hartwick, NY) use elements collected from their local environments – bark, twigs, thorns, seedpods and more–repurposed into elegant, fragile works of art, emitting elegiac cautionary vibes. The theme, a conceptual framework, is only lightly suggested: viewers will reach their own conclusions. Dzeli (AKA performance artist, Angelica Palmer, Hartwick, NY) will make a guest appearance at the opening—second half– and will drill down on the theme with what she terms ‘healing grief rituals’.  She will invite gallery visitors to participate in a mini interactive performance –participation optional– outdoors.

All welcome. Free admission. The show continues through Saturday June 29, and will offer free artists’ talks June 13 and 29, as well as a two-hour workshop (fee) led by Dzeli the evening of June 15 (please inquire.)

The show and season are dedicated to the memory of arts educator, Amy Brooks Snider, Pratt Institute professor emerita and an Art Garage friend, aficionado and a guest moderator for several artist talks.

ABOUT THE ARTISTS: Sarah Draney’s powerful nature-based works include narrow ladder constructions and small structures—shelters or homes? —made of plant stems, tendrils, grapevine sections and twigs. She sometimes incorporates a moon or owl image. Ms Draney gathers the materials from her delightfully idiosyncratic garden of meticulously placed stones and ferrous objects, many coated with mosses and lichens. She also uses bark-like bits of thick and crusty handcast paper. The work, whether human scale or tiny, is then coated with black paint imbued with a shimmering metallic sheen. Art critic Lucy Lippard described her work as “objects of intimate intensity…important for their very lack of pretension to importance” and noted that they are filled with the “textures of a gypsy spirit and a more solemn, abstract splendor.” After Ms Draney left the art scenes of San Francisco and New York for the Hudson Valley, she created her own garden world around her rural home. She stated: “I really wanted to make a world and live in it.” She has exhibited her work nationally and beyond, at venues in Orlando, FLA, San Antonio, TX and elsewhere. She has exhibited extensively in NYC area and in the Hudson Valley, at such spaces as the A.I.R. Gallery, NY, NY, Art Awareness, Lexington, NY and Byrdclyff, Woodstock, NY. Many of her early shows were in “women artists” exhibitions. Art Forum, Art News, the New York Times (H. Cotter), The Soho Weekly News (William Zimmer), the Village Voice and the Woodstock Times have reviewed her work. She studied at the Art Institute, San Francisco, CA, the New School for Social Research, Bard College and the University of CA Berkeley. She will be present at the opening and give an artist‘s talk on Saturday June 29.

JAMES GREGG HERMAN James Gregg Herman’s career encompasses fine art and design. He has exhibited his paintings and sculpture in New York City and Europe.  The New York Times featured and reviewed his patented Champagne Stool design. His work is in numerous private & corporate collections. Born in Wichita, Kansas, he grew up in Saint Joseph, Missouri, studied at the San Francisco Art Institute and earned his MFA (painting) at the University of Oregon. Mr. Herman moved to Tribeca, NY in 1974, where he maintained his studio practice until a permanent move Upstate in 2010, with his wife, painter Lillian Voorhees. Prior to the move he was commuting, yet had already become involved in local environmental issues, including fracking. He helped found Sustainable Otsego. His ongoing educational outreach about fracking earned him the Otsego County Conservation Association honor, Conservationist of the Year, in 2010. Mr. Herman’s self-described “peripatetic art career” encompasses product development for art manufacturers, technical lectures on color, a studio assistant position with Malcolm Morley, and architectural illustration work for Robert A.M. Stern. His virtuosity encompasses a broad range of art disciplines. Daily walks around his Hartwick property inform his artistic choices and materials. Though ample, his studio leaves one just enough room to maneuver around a plethora of tools, branches and wood slabs — and objects not yet realized. About his Post Naturework, he noted, “Bark shards bring our attention to things we usually throw away or burn— they are nature’s pottery shards.” In some pieces, he carefully highlights bark patterns with paint “to reveal the tree’s growth in ways that suggest pictorial structure—one can imagine them as abstract paintings,” Herman suggested, “ or simply what they are; a commonplace beauty revealed.”  In other pieces everyday materials such as thorns take on a threatening aspect “that reflects the ecological crises that we all are facing.” His works range from a larger than life walnut sculpture, to diminutive marked forked twigs, to photographic works of carved out winter-crushed grass.