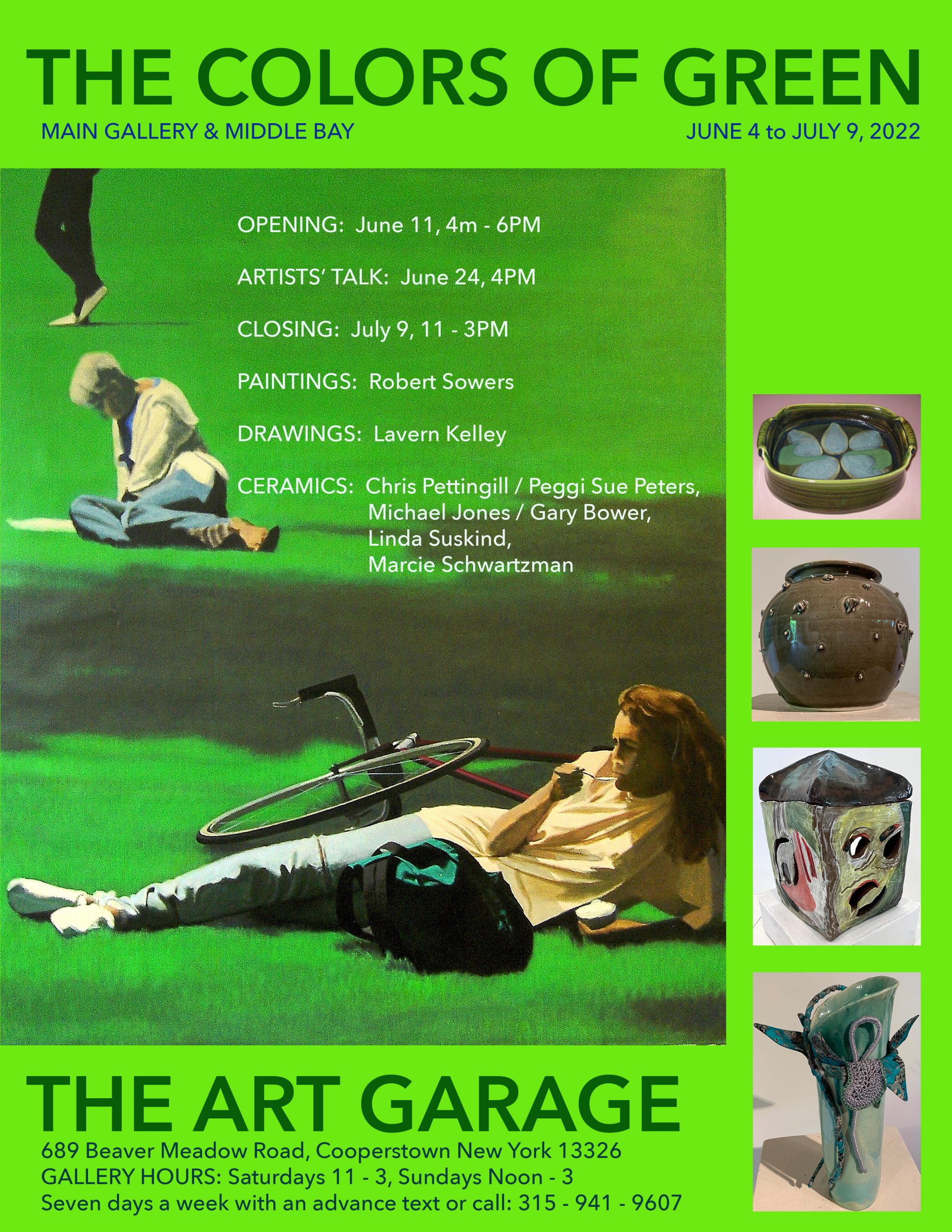 The Colors of Green

The Colors of Green

Drawings: Lavern Kelley, all done in the 1940s.

A wide range of art, all with a touch — or more — of green

The exhibition will be open Saturdays 11-3, Sundays, noon-3, & as always daily with a call or text

The first summer show of the season, The Colors of Green, at the Art Garage, 689 Beaver Meadow Road, features large verdant paintings by Robert Sowers (1923-1990) that depict summertime relaxed figures, luxuriating in sunshine and luscious fields of green. The works are based on photographs the artist took in parks in Manhattan and Brooklyn in the 1980s. Additionally, Michael Jones with Gary Bower, Chris Pettingill with Peggi Sue Peters, Linda Suskind and Marcie Schwartzman will present a range of ceramic works – functional, fun, or elegant — that share touches or shades of green.

The Middle Bay features farmer artist Lavern Kelley (1928-1998) and his drawings from the 1940s of rural activities of the time. Kelley is arguably Otsego County’s most famous artist, with works in the Smithsonian. He is better known for his carved trucks. The show includes horse-drawn wagons, beautiful idealized farmsteads and what was then the latest in farm equipment. Notecards and catalogue available.

The six ceramic artists all have extensive experience as artists: the Pettingill/Peters team sell their attractive stoneware regionally and nationally; Michael Jones & Gary Bower are established maestros, in paint and clay; Marcie Schwartzman has earned national attention for her creative integration of clay with fiber; and Linda Suskind, better known as a painter, presents very small geometric constructions.

Robert Sowers (1923-1990) is best known for his trail-blazing architectural stained glass (Wikipedia – Robert Sowers). A Fulbright supported his research into medieval stained glass. He traveled extensively in Europe where he closely observed works by European Old Masters as well as the Cubists. “I’m imprinted European,” he declared, although Stuart Davis was his influential master teacher at the New School. He attended the Central School of Arts and Crafts, London and Columbia University.

His architectural glass commissions took him coast-to-coast, from NYC to Palo Alto, and points in between, such as a Missouri project with the preeminent architect, Eero Saarinen. Thousands saw his vast wall of glass at the American Airlines terminal at JFK (then known as Idlewild) created in 1958/59 – and demolished in 2008 for new construction. The Museum of Modern Art included his work in a New Talent Exhibition in the late 50s. Sowers also authored four seminal books about glass. He was a major influence on the next generation of stained-glass artists such as Kenneth von Roenn, Tallahassee and David Wilson, So. New Berlin. The Rakow Research Library-Corning Museum of Glass is the repository for his materials.

In the 1980s in NYC Sowers returned to his roots: painting — sometimes abstract, sometimes figurative. Light and color, critical in his glass work, took on exciting new qualities in his paintings. OK Harris South represented and sold his work in 1987/1988. New York provided an inexhaustible source of things to observe and Sowers was a superlative photographer. He captured hundreds of scenes that spoke to him, whether for abstract qualities or other aesthetic considerations: when he reviewed the hundreds of pictures, a few would leap out. Those became his paintings, built entirely on the relationships between form and color. Form must be beautiful and exact, he noted: subject matter was secondary. His estate of paintings belongs to his widow and is managed by David Wilson.

ABOUT THE CERAMIC ARTISTS: Perched above the Susquehanna River in Afton, NY., Chris Pettingill and his wife Peggi Sue Peters, are known for handmade stoneware and porcelain pottery with elegant glazes. Because the ceramics are largely for cooking and serving food, they pride themselves on attention paid to use of non-toxic elements in their work, both clay or glazes. “We make all of our own glazes in our studio,” they noted, to ensure safety for their customers and their own health. The artists met at Harford community college in Bel Air, Md; then completed degrees at Alfred College of Ceramics, SUNY. Pettingill went on to study ceramic sculpture at University of the Arts, Philadelphia and at Indiana University, Bloomington, where he earned his MFA. The couple started their first studio in Delta, PA in 1995. Since then they have conducted workshops at Augusta State University, Ga., University of South Carolina, Goucher College, Md, and various local schools when not at potters’ wheels or mixing glazes in their own studio. Their work is in numerous private collections in the US and abroad. Pettingill is currently an Adjunct Professor of Ceramics at SUNY Oneonta.

Michael Jones with Gary Bower: Bower shares two extraordinary “pots” by Michael Jones, Ohio, with whom Bower collaborated in the 1980s. Drawing upon his experiences living in Japan, and studying under a student of Living National Treasure, Kanjiro Kawai, Jones focuses on functional work inspired by Japanese and Chinese stoneware. He received a BFA (sculpture) and MFA (ceramics) from Ohio State University and is a full-time studio artist. Gary Bower is originally from Ohio where Wright State and Ohio State awarded him residencies. He came to the art world’s attention early in his career with elegant translucent grids. He has had more than 30 one-person shows in France and the U.S. Legendary art dealer, Ivan Karp, encouraged him to move to Charlotteville, not far from Karp’s weekend retreat. He and his family have used Charlotteville as their home base. Bower has been awarded residencies periodically including in Philadelphia (Fabric Workshop) and Minnesota (Minnesota College of Art & Design). He ran the Lacoste School of Art in Provence, France, with his wife artist Ursula Bower in the 1990s. He taught art at SUNY Cobleskill for 10 years. Originally a philosophy major, he earned his MFA from Ohio State University.

Marcie Schwartzman, Cooperstown NY, has worked with clay since college and with fabric all her life, but she began her art practice in the early 2000s. She studied in Baltimore with the co-founders of Baltimore Clayworks; and at Virginia Museum of the Arts. Later she apprenticed with Sara Baker, long-time ceramicist in Bloomsburg Pennsylvania. Her focus on glazes results in varied sheens and textures. She builds on deliberate “mistakes” ( ‘crawling’ and ‘pin-holing’) to create provocative texture, textures which inspired her to introduce fabrics and fibers “ I see how fabric and fiber can collaborate with clay and glaze,” she noted. Judy Chicago’s installation, The Dinner Party, inspired her to engage in “women’s arts” – embroidery, knitting, crochet, sewing. She is drawn to vessels and their symbolism: inside and outside, containment, openness. Her fibrous “wraps” for vessels “hold it all together,” she noted. Her sensual piece, Tomeish, is inspired by Japanese “stopping stones” used to indicate a closed route: a rock, tied with rope and a woven knot at the top, is placed on the ground indicating the path NOT to travel. “It is silent and polite,” she noted.

Linda Suskind who lives and works in Upstate New York, is a mixed media artist who works in paint, collage, and ceramic. She works in an abstract surreal style using portraits, patterns and landscape elements. Suskind received her BFA from the University of the Arts, Philadelphia and studied at the Tyler School of Art in Rome. Her recent group shows where her work has been featured include at the Flatfile Gallery, in the 8 x 8 show (online), Carter Burden Gallery, NYC in Looking Forward, Atlantic Gallery, NYC in Drawn to Paper and Ethan Cohen Gallery, Beacon, NY, Darkness before Dawn. Locally, this past November her work was featured in a two-person show at CANO, Oneonta, NY. Suskind was awarded the Proctor Prize by the Cooperstown Art Association for her entry in the 2020 National Juried Show. Her work has been included in numerous group and solo exhibitions in NYC and throughout New York State, and in Philadelphia. She was awarded a residency at Millay Colony, NY and this spring she was awarded a residency at the Chateau Orquevaux in France.