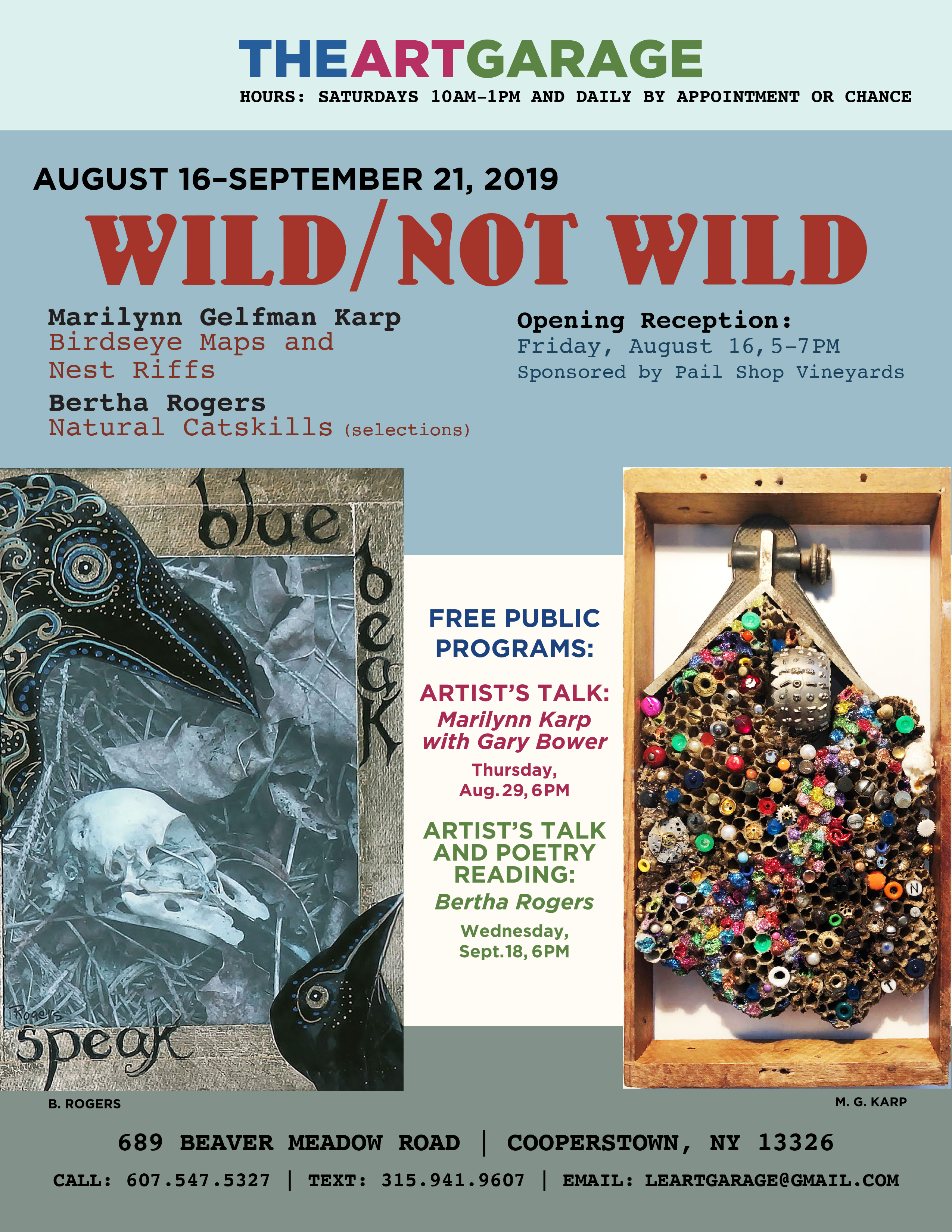 Both artists are longtime observers of the natural world and cleverly incorporate elements in their mixed media pieces, which inform and inspire their aesthetic. Ms Karp’s new works, Birdseye Maps and Nest Riffs, often begin with a repurposed bird or paper wasp nest or honeycombs. Ms Rogers’ selections from her Natural Catskillsseries tease out the all-but-invisible wild animals that haunt the woods which surround her mountain farm.

Wild Not Wild will be on view through Saturday September 21.

Ms Karp spends her summers in Charlotteville, NY where she and her late husband, the art world titan Ivan Karp, have created a rural oasis, far from their busy New York City life. She is the director of the Museum of the History of Charlotteville that presents the history of the town and its families in exquisitely researched detail. She also directs the Anonymous Arts Museum that shares the same building.  An art historian as well as an artist, Ms Karp taught at New York University for 42 years; she is a Professor Emeritus. She is best known for a body of work that is based on accretion/accumulation of small manufactured objects. The new work reflects this practice although the materials may be gleaned from her pastoral walks rather than an industrialized milieu. “I’ve taken poetic license with forsaken nests and pounced upon their ready adaptability to my inclusions loosely following animal kingdom rules to make harmonious unities of the unexpected,” she noted. “My most cherished finds have been nests in which the birds or insects have made use of manmade objects as either foundational support for their seasonal habitats or have plucked and employed discarded manufactured bits with which to attract a responsive mate.” The precision in her elegant work parallels the precision the wasp and bird enact in their initial shelter-building.

“These works are about changes—in individual lives and in the environment we inhabit,” Bertha Rogers stated about her Natural Catskillswork. She continued, “I am deeply interested in the relationship of the human self to nature and beyond;I believe that humans must learn to relate to other species, that those relationships could be our salvation in a terrifying world.”Ms Rogers encourages people to look at “things” in new ways, “ presenting a new outlook on everything from insects to widows. The concrete is interesting, but what is also interesting is what is not seen, only implied—perceptions of the imperceptible.” Text is inherent to Ms Rogers’s mixed media pieces, who is also a wordsmith/poet.  A child of the flat Iowa landscape, she is particularly awed at the Upstate Catskills mountains and wildlife, which she often celebrates in her poems. Her prolific work has been included in numerous anthologies, most recently in Like Light: 25 Years of Poetry & Prose by Bright Hill Poets & Writers(which she also edited). Her translation of Beowulfwas published in 2000, and her translation with illuminations of the Anglo-Saxon Riddle-Poems from the Exeter Book, Uncommon Creatures, was published in 2019. Rogers’s paintings, illuminations, and artist’s books have been shown throughout the US and abroad. In 2007 the Association of Teaching Artists conferred the Distinguished Service to the Arts in Education Field Award to her. Ms Rogers founded, with her husband the late Ernest M. Fishman, the Bright Hill Press & Literary Center of the Catskills in Treadwell, NY. She led the development of the New York State Literary Web Site and Literary Map in partnership with the New York State Council on the Arts (NYSCA). ###